The mountains, a new dimension

Besides the rustle of the wind, the sound of the water torrents, and the rhythm of our boots against the rocks, there is always another sound that accompanies us on our M4810 outings. That of infinite chitchat which - no matter what height we reach – doesn’t cease.

And among this forest of voices, there is one that particularly struck me during this last outing through the power and the cheerfulness that it exuded.

It’s Angelo’s, a tall, dark-haired guy with a bright, smiling face. In the last phase of the adventure, our path was a bit different from that of most members of the group, and he made me discover a new dimension of the mountains - his.

We start chatting because I heard him make a joke that identified him as a psychologist without a shadow of a doubt. And, to my curiosity, I discovered the existence of a fantastic field: the psychology of wellness!

“Amazing! So there couldn’t have been a more natural choice than Methodos, right?”

“Yes, actually, but I never would have thought so. Also because I never know something like it existed until I ended up in it. I was working on my thesis and I collaborated with someone that ended up being my colleague. It was serendipitous, both the situation and the time: it coincided with the launch of the Methodos start-up, Digital Attitude.

Using technology to help people change - the founding principle of DA, is what pushed me to join the team - my academic background, and my specialisation thesis all integrated perfectly into what I was doing. And like that, for exactly a year and three months, I’ve been part of the family!” 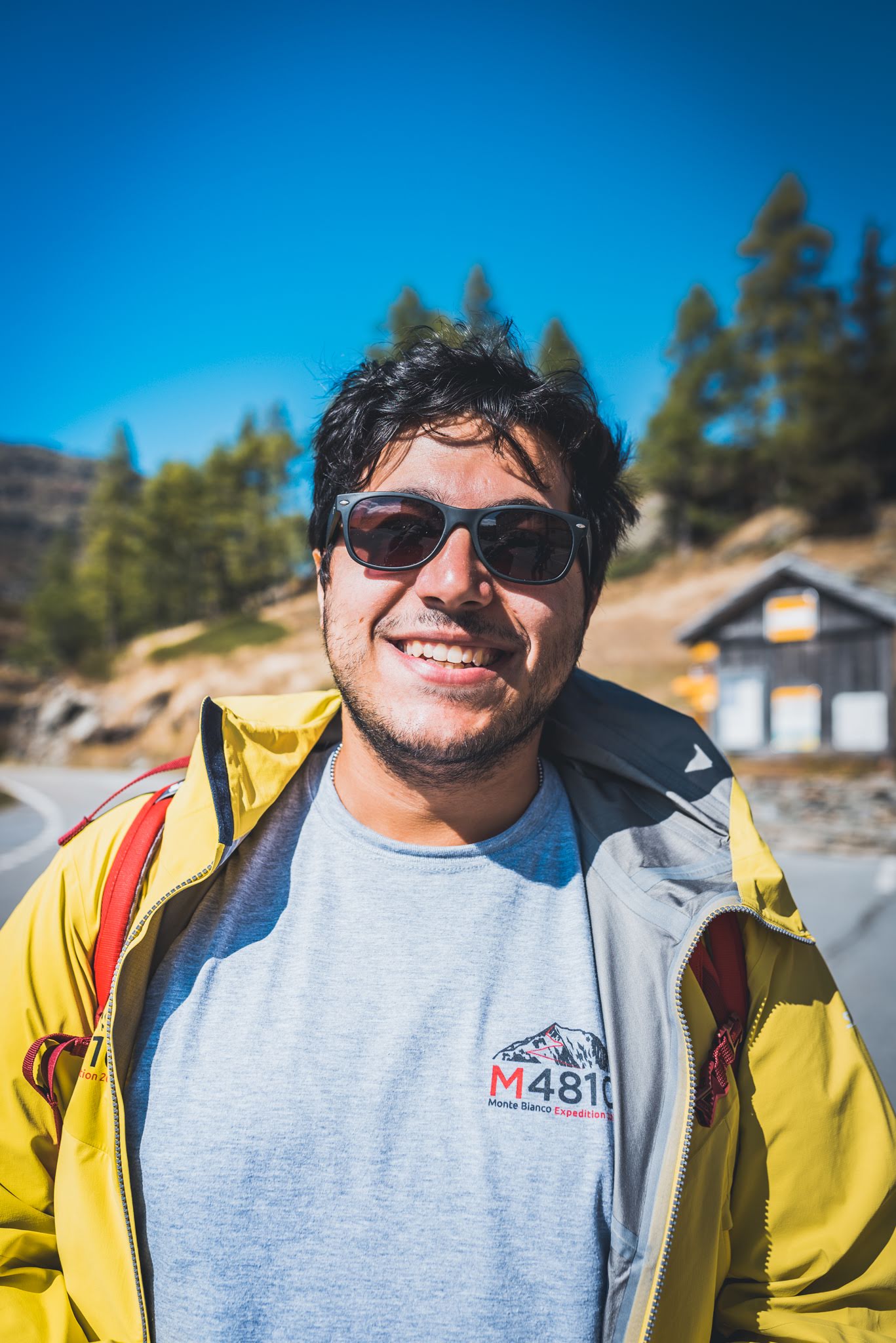 Chance, good luck, or fate. The same that, just months after being hired, in Italy’s most important change management company, makes you find yourself dressed in mountain gear at 2000 metres. A real climb to success. I ask him how he experienced the news of M4810, and he bursts into one of his contagious laughs that makes me laugh as well.

“The first time that I heard about it I thought it was a joke! I’m not the mountain type – give me a beach and the sea and I’m happy. Actually, I hadn’t even been in the mountains, not even to ski! When they told me that for work I would have to try to reach the peak of the Mont Blanc, I thought I was in a different dimension, that I was on the other side of the mirror without even realising it. And it’s almost that… the mountains are like being in a different dimension.”

While we continue chatting and walking, the sun disappears behind the cloud. What was an annoying cold wind now feels more like a freezing slap, coming directly from the glacier a couple of kilometres away. I shiver like a leaf while I put on all the layers that I have, even more so looking at Angelo, who had taken off the bottom part of his Salewa technical pants and was flaunting his bare legs and branded socks, displaying the Mont Blanc logo with the red line that represents our expedition. He starts laughing at my amazement and takes my hands in his: they’re boiling – unbelievable! He may be the sea type, but he has an amazing predisposition for the mountains, this guy.

And, in fact, he goes on to tell me that he’s discovering a new world. The views, the nature, the new, fresh air. But also the fatigue, the cold, the effort towards reaching the top that doesn’t seem to get any closer. This is the reason why he hasn’t yet won over the mountain – not completely, at least.

“It’s like going into the Russian mountains. While the train goes higher and higher, with that unsettling sound of wheels and metal, and the earth that is with every minute further below, you ask yourself who the hell made you do it. You’d like to go back down, you want to turn back, but at this point you’re stuck and you can’t do anything about it. When you get to the top, and the force of gravity starts pulling you down, you’re terrified. But then a scream of fear becomes one of pleasure, you laugh and laugh while you enjoy the view and the route. And when you come back down to earth, you can’t wait for the next trip.”

I laugh at the metaphor, cheeky but true: it’s true, above all in this context. The people who make up the M4810 expedition are very different: there are those who love the mountains and those who have never set foot, those who have always dreamed of this kind of adventure, and those who would have been much more comfortable on the couch. But, in the end, they’re all enjoying the journey. The challenge is in making it stimulating and accessible to all. And, in fact, Angelo sometimes asks himself how far he’ll get, when he’ll reach his limit.

“I’m starting to train, but I don’t know how far I can go. So far, I’ve always been able to reach the top, but at a price. After the first outing I thought I’d die!!! Powered by I’m not sure what force, I did it – but I was destroyed. Actually, when we got back down to the valley and got the car I couldn’t even drive. No, really: one leg was so stiff and painful that I couldn’t even change gears, I had to do the whole trip in fourth.

I realise that my level gets better very time, though. The third outing, in Mont Fallère, was the most beautiful, the most challenging, but also the one that gave me the most: in terms of views, atmosphere… and then there was the via ferrata, my absolute first one. The emotions of the peak, walking on the crest. Of being tied to one another, of having to always be present in your rapport with the person in front of you and the one behind you in order not to risk making everyone fall. A beautiful metaphor for what we’re doing, of what it means to be a team.”